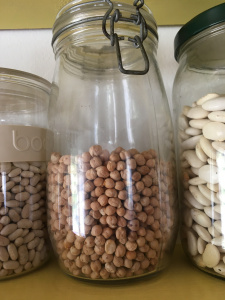 This is a recipe from the ‘live to be one hundred’ collection. Revithnos is a chickpea soup from Sifnos in Greece.  It’s cooked slowly using just a few key ingredients – chickpeas, onion, olive oil, lemon and bay leaves. The slow cooking makes the chickpeas velvety soft in an emulsion of olive oil and onion which is brightened up with a squeeze of lemon juice. I seldom cook this dish as it takes a long time to cook but time is something we have plenty of at the moment. Although don’t confuse taking time with having to do a lot as after the initial cooking of the onions and bringing everything to the boil this more or less looks after itself.

Today’s revithnos did take a long time, especially as our Irish bought chickpeas must have been sitting in a warehouse for months if not years. I soaked them for 48 hours then cooked then for five hours by which time we were hungry and the dish was not ready so we resorted to blasting them in the pressure cooker for 10 minutes. They were good, softer would have been better but our appetites got in the way of culinary excellence.  Next time I will seek out fatter and younger chickpeas but I still love the simplicity of this dish and even old chickpeas make a richly satisfying  one pot wonder

Here’s the recipe although the cooking times are variable and it’s also possible to cook this entirely stovetop – or blast it in the pressure cooker if your hunger gets the better of you. 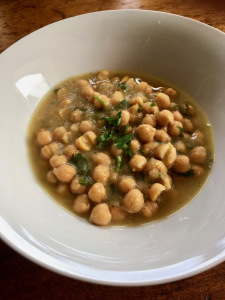 a handful of parsley

Soak the chickpeas over night then drain well.

Peel the onions and garlic and chop finely.

Put the olive oil into a heavy pot and heat gently. Add the chopped onion and cook until the onions melt down but don’t let them brown. Stir in the chopped garlic and cook for a further two minutes then add the chickpeas , orange peeland bay leaf. Stir everything together for a few minutes then add enough water to cover everything by 2-3cm. Bring to the boil, reduce to a low simmer and cover with a tight fitting lid. Cook for one to one and a half hours or until the chickpeas are soft.

Stir in the juice of a lemon , add a little more water if it looks like it’s getting dry and season with a little salt. Pop the pot into a low oven , 150c, oven for an hour.

Serve with a little chopped parsley.